You can register online for the convention & contests

All other information is available on our website at okauctioneers.org For questions, Contact Cali Crissup, Executive Director at 580-327-7525

(1+ years in the auction business)

The weekend of February 15-16, 2019 was a busy one for Oklahoma State Auctioneers Association (OSAA). This is when auctioneers from across Oklahoma gather for the Annual OSAA Winter Meeting, in Oklahoma City, OK, at the Embassy Suites Downtown OKC.

While several auctioneers come for the educational classes, the convention offers many more opportunities for both seasoned veterans of the auction profession as well as newcomers to the industry. Some say it’s the competition that attracts them. Others say it’s the entertaining nature of the business. Whatever the case, people everywhere are sold on auctions.

Real estate, collector cars, antiques, art, business equipment, electronics, livestock…it’s hard to name something that hasn’t been sold at auction. No one understands this better than the auctioneer himself. People who attend auctions often only see the auctioneer as someone who shows up the day of the auction and “talks fast”. Ask any full time auctioneer and you will find out that there is more to it then fast talking.

On Friday, February 15, the 2019 OSAA Winter Meeting kicked off with our Annual Competitions including the Oklahoma State Auctioneers Championship Bid Calling Champion, the sought after title at each years’ meeting. This is where men and women alike compete for this prestigious title and the opportunity to represent Oklahoma, not only at a state level, but also at the National Auctioneer Champion Contest held in New Orleans this summer.

Each year, we host an Advertising Contest for our membership, the winners are as follows.

There is truly something for everyone at this convention, in addition to Champion Bid Calling, the Rookie & Jr.

Contests are included for the novice beginner and the Ringman competition is fierce. The following winners were announced at the 2018 Winter Meeting.

Auctioneers create a competitive and entertaining atmosphere that attracts consumers to the sale. Their hand gestures, eye contact with the crowd and their rhythmic “chant” stirs buyers and brings the sale to life. It’s what separates auctions from other types of sales. Though one of the oldest methods of sale around, auctions continue to thrive and grow and are held today around the world. Auctioning has stayed tried and true with the times and continues to be a favorite among buyers and sellers.

It was a amazing competition. the talent was huge.  so proud of everyone!
The Results are in… 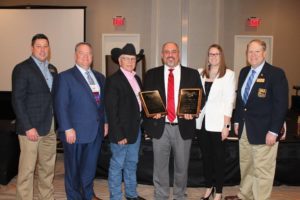 Wayne Casteel, 79, of Lucien, Oklahoma, was the son of Howard Thomas and Nettie Velma (Roberts) Casteel. He was born July 29, 1933 on the Casteel
family farm in Marshall, Oklahoma and died December 31, 2012 at OU Medical Center in Edmond, Oklahoma.

He was a 1951 graduate of Covington High School.  Wayne served his country in the United States Army from 1953 to 1955, spending 16 months in Germany.

Wayne started his career in 1949 but he began auctioneering in Noble County in 1958.  He opened his auctioneer/real estate office in 1970.  He has been in the real estate business since he was sixteen years old.

Wayne has ridden his horse in the Cherokee Strip Parade every year since 1956, being named the Parade Marshall in 2010.

In, 1964, he was instrumental in developing the rural water district in Noble County.  Wayne was an avid supporter of the FFA programs in several communities.

He enjoyed raising cattle and ranching along with his auctioneering and selling real estate, but above all he loved spending time with his family and many friends.

Memorials may be made to the Wayne Casteel Memorial Scholarship fund in care of Brown-Dugger Funeral Home, 1010 N. 7th  Perry, Oklahoma 73077.

He is preceded in death by his parents, Howard and Nettie Casteel; one son, Matt Douglas Casteel; one brother, Charles Jay; one sister, Ruby Branson.

Online condolences may be sent to the family using the online guestbook at www.brown-duggerfuneralhome.com.

Make plans to attend this year’s Winter Meeting on February 3-5,2012 at the Heritage Place in Oklahoma City.

This year, the host hotel will be:

A large, healthy breakfast will start your day out right. Enjoy our breakfast buffet, complete with scambled eggs, bacon, sausage, biscuits and gravy, French toast, pancakes, hot/cold cereals, breakfast pastries or let our Breakfast Chef cook you up an omlet (made to order); top it off with assorted juices, milk and/or coffee.

Manager’s Reception
A quick refreshment at the Manager’s Reception can provide a great pick-me-up before you head out to dinner. Alternatively, you can take a little more time and enjoy a glass or two of your favorite libation and light snack.

They have complimentary wireless internet throughout the hotel.

This year’s Summer Conference will be held in Stillwater, OK on August 6th and 7th. Make your hotel reservation at the Stillwater Plaza Hotel & Conference Center. Rooms are $64.95 and are reserved under the OSAA name. The hotel is pet friendly and includes a continental breakfast. To reserve your room contact Sean Haley at 405-377-7010. More information can be found in the June edition of The Chant.

Convention dates are February 4-6, 2011.
The OSAA Board of Directors selected the famous Heritage Place as the location for the convention, siting that this is the perfect venue for auctioneers to gather for networking and education programs.

Heritage Place is located at:  2829 S Macarthur Blvd, Oklahoma City, OK.  We are finalizing the hotel for overnight accommodations.

Christie King, CAI, is selected to kick-off the convention, additional speakers are being confirmed.

Larry Theurer, CAI, has graciously accepted our invitation to present his “State of the Real Estate Industry” presentation.

Mark your calendars and check back for additional information.

We have a block of rooms ready for auctioneers to make hotel reservations, please click here to learn more about the Hilton Garden Inn, Oklahoma City Airport. Our room rate is $89.00 per evening.

The recent OSAA Annual Convention was very successful. Attendees enjoyed the education sessions and had a front row seat to see the new president installed, newest member to the Hall of Fame inducted and new contest champions.

Prayers to Paul Spitler & their family after the loss of his wife Emily.

Check out Apro! They are offering a Relief Fund during these tough economic times. ... See MoreSee Less

Due to COVID-19, the OSAA Board has decided to publish our newsletter digitally for the time being. Please let us know your thoughts as we all manage through the unknown in the upcoming weeks/months.

We currently still have our Summer Conference scheduled for August 1-2, 2020, in Stillwater, OK. More details will be sent via email as they become available.

We encourage fellow auctioneers to honor social distancing and the other guidelines provided by the government & CDC.

Hello Auctioneers & Friends, we would really appreciate it if you would help our association reach more people just like you!

Facebook has a new feature & it only takes a few seconds to do! I’d really appreciate it if you could:

Go to our page
Scroll across the top, go to ‘COMMUNITY’
Click 'INVITE FRIENDS'
Click ‘ALL'
Wait 10-15 seconds for the invitations to send

Supporting our association doesn’t require spending money. It’s as simple as sharing, liking and promoting us!

Thank you all for your support! ... See MoreSee Less

Whereas, it is necessary, in order to fit ourselves for the responsibility of Auctioneers, to cultivate the spirit of co-operation, improve our profession and protect the interest of the Auctioneer, to protect the public against unscrupulous practices; therefore, we do constitute ourselves the Oklahoma State Auctioneers Association.

On behalf of the Board of Directors of the Oklahoma State Auctioneers Association, we would like to personally invite you to become a member.